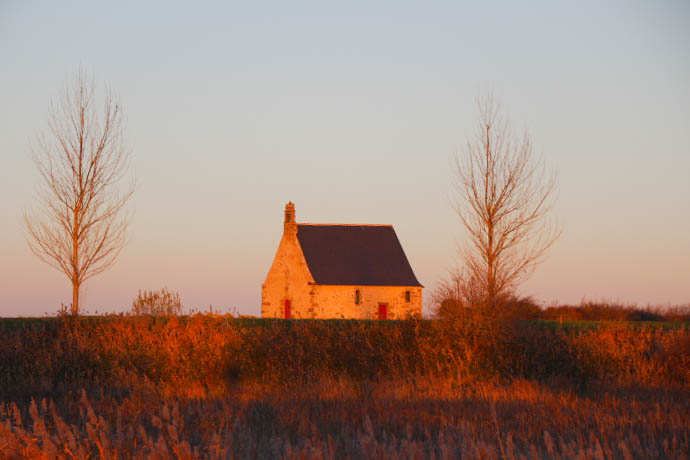 This is one of my favorite place to have a walk in the Mont Saint-Michel bay. I also like to go by bike there. The chapel is very tiny & unique. This place is worth the visit, especially at sunset!

All the environment around the Bay of Mont Saint-Michel is very quiet, you will see and hear lots of wildlifes!

When you will reach the Chapel, you will see for sure the famous sheep of the Mont-Saint-Michel, that will be eating the salty marsh around.

We have more articles about the area on our travel blog.

It is a protected monument in the Mont Saint-Michel bay . The bay is part of the club of the world’s most beautiful bays and is listed as a UNESCO world heritage site.

Saint Anne’s Chapel is located between the sea and farmland, this historical site was built in 1684 and is known to protect the land around from the sea. When I arrived there, the door was open and there was an art exhibition inside!

The chapel is along the bay. Did you know the Mont Saint-Michel bay has the most impressive tides in Europe? The chapel is also a nice spot to discover the phenomenom.

Every year, thousands of people reunits to celebrate Sainte Anne, the third Sunday of July. The pilgrimage is now a catholic parade over the bay, but it  used to be a real popular party for the habitant around.

How to get there: The Chapel is in the town called Cherrueix. You can reach it by car but also by bicycle from Edd Hostel. Follow the Voie verte from Dol to Vivier Sur Mer. Then, follow the Bay on the left, like if your goal was the Mont-Saint-Michel. It takes 1h to get there, the first part is across corn fields and the second one is along the bay!

Where to eat: You will find “crêperie” local food, everywhere! The Mont St Michel bay is also known for its oysters, mussels and sheeps. On the way, a nice restaurant called “L’abri de Greves” is a nice place to have a break.